Anyone who has attended the AATE/ALEA national conference in the last…well, many years, might have noticed this year that ALEA and AATE have gone separate conference ways – ALEA in July and AATE in December.

There are a range of practical reasons for this, but for me it highlights some common territory between English and Literacy teachers that has perhaps been assumed over the years.  After all, when we go to these conferences aren’t the Literacy teachers invariably Primary school teachers?  Are English teachers really Literacy teachers at all?  To what extent to we belong ‘at each others conferences’?

So I have put in a proposal to deliver a 30 minute paper on the topic: Queer as folk: The English and Literacy teacher divide

The title purposefully invokes queer discourse in questioning the way we use labels in constructing our identity.

I’m hoping to stir up some controversy with this one – hope it gets accepted!

END_OF_DOCUMENT_TOKEN_TO_BE_REPLACED

My use of Inanimate Alice as a text in the English classroom was part of a wider unit for junior high school on ‘Narrative’ where multimodality was also being introduced as a concept.

Last year I showed Episode 1 of Alice to my tutorial groups of pre-service English teachers.  The quality of the text blew their mind.  I chose to show it on a large screen and some students took turns at coming up to control the interactive parts of the story.  At the end they spoke to the class about how they felt about the added layer of participation in the text – they enjoyed it, though some confessed they had mixed feelings about the text at first as my explanation had resounded with childhood memories of choose-your-own-adventure style books, a genre they had come to look upon as formulaic and contrived.  All found Alice to be anything but.

Viewing the story as a class was a powerful way to communicate the potential of opening the English classroom to texts that shake up our notions of genre and text type (rather than rote teaching students how to classify forms and features).  It also refocussed our attention on the powerful role of storytelling in life and left everyone feeling inspired to seek out ‘better texts’ and ‘more cutting-edge material’ for their future English lessons.

This year I’ll be showing Alice again, but in smaller groups this time for a more intimate experience.  I’d love to hear from any teachers who have seen any of the Episodes – have you had a chance to use them in class at all?  What potential does a text like this hold, do you think? 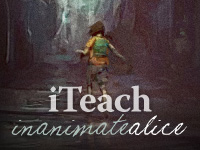 Cheering because my name is now on the website for English Curriculum Studies 1 in the Faculty of Education at QUT:

I’ll be teaching the tutorials in the new blended learning room (‘The Blender’) and have big albeit still flimsy plans to integrate a backchannel into the classes.  I’m going to ask all of the students to make a twitter account to participate, and have created an account to stay open for anyone to use during class @CLB_018 …

What advice can you offer my preservice teachers for productive/generative tweeting?  Or advice for me, for using it in the classroom?

(Pictures of The Blender to come!)

Ever get that soupy brain kind of feeling?

I usually come to the end of leave (hmmm, telling – I used to call it ‘holidays’) feeling focussed and refreshed.  Not always ready to end the holiday mind you, but at least with my head together.

2011 on the other hand has arrived with a distinctly where is my mind vibe.

A few months ago, Darcy left me thinking with a post asking about what we think our individual future holds.  It struck me that submitting my PhD and starting an awesome job at QUT looks distinctly like already being in my future.  Exciting, of course, but the prospect of now having to be in it and of having to *shudder* set new goals is apparently more daunting than I gave it credit for.

I need a meme or something to solve this problem.

Should we have a safety word that you can use if my posts get too boring/navel-gazey?

I wonder if the popularity of my top five reflects audience interest in curriculum issues, or the hot-ness of topics such as ‘HSC’ and ‘multimodal’ (due to its appearance in the English National Curriculum)?

The stats helper monkeys at WordPress.com mulled over how this blog did in 2010, and here’s a high level summary of its overall blog health:

In 2010, there were 71 new posts, growing the total archive of this blog to 181 posts. There were 41 pictures uploaded, taking up a total of 16mb. That’s about 3 pictures per month.

The busiest day of the year was January 24th with 189 views. The most popular post that day was Choice based on what now?.

Where did they come from?

The top referring sites in 2010 were twitter.com, facebook.com, google.com.au, eduleader.org, and Google Reader.

These are the posts and pages that got the most views in 2010.

Choice based on what now? January 2010
37 comments

Back from San Francisco and trying to muster a direction for blogging…is it too late to flag closure of 2010?  I thought this Facebook app was pretty cool:

*sigh* I’m expecting to need a different approach to online communication this year as email and social networking become more closely aligned with my ‘work’ than with reflection and dialogue.  What that means in reality…stay tuned!