I was recently directed to the Wheeler Centre website to take a look at the speeches and talks they had available to view and download.

Melbourne has a new kind of cultural institution. The Wheeler Centre – a centre dedicated to the discussion and practice of writing and ideas. Through a year-round programme of talks and lectures, readings and debates, we invite you to join the conversation.

Their slogan is ‘Books. Writing. Ideas.’

It wasn’t long before I found a resource that drew me straight in – I am a big fan of Nam Le’s collected short stories in The Boat and even set the book on our ETAQ Book Club list this year!

If you also like books, writing and ideas, please enjoy this 10 minute talk by Nam Le, on the theme ‘Voices from elsewhere’: 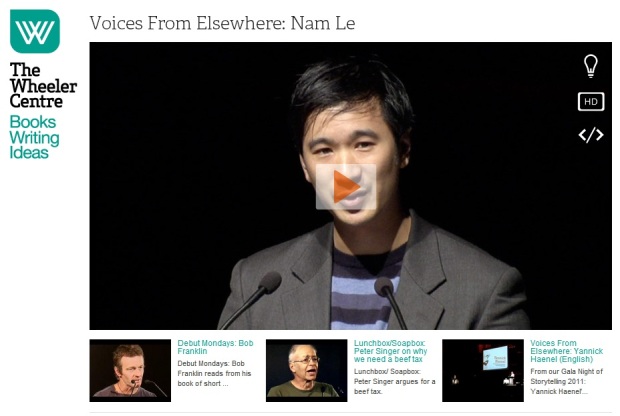 In 2010 the English Teachers Association (NSW, Australia) celebrated 50 years of operation and service to members.

A DVD was released to members, with reflections from past and present ETA leaders. It is an excellent record of the history of the association and provides invaluable insights for new teachers!

I was surfing YouTube when I found that the ETA had uploaded the first section from the DVD onto the web. Here it is, roughly 8 minutes, on a range of teachers’ first involvement with the ETA:

I always spell literature with a lower case ‘l’. Unless having to use title case forces me to do otherwise, and even then I only do it grudgingly, preferring to write the whole word in CAPS. ‘Literature’ is not a proper noun, no more than the words ‘music’ or ‘drama’ or ‘visual art’ or ‘sociology’ are. No, ‘literature’ is a field of study, as vulnerable to attack, redundancy and dissolution as any other. ‘Literature’ is not like ‘The Bible’, it is not one definable thing. It is not like ‘Shakespeare’, it does not have a personality nor is it an old friend. It is a field, a part of the landscape that is identifiable, but that can also shift and erode or be crowded out, given enough time. It is important, oh yes, like an atomic bomb, or a legacy – but it is not a proper noun.