Choice based on what now?

This day of rest greets us with the most excellent news that Julia Gillard has answered the calls of parents around the nation to identify exactly which schools the poor, low-achieving and, most importantly, Indigenous students are attending, so that we can all avoid these cesspools of failure with confidence rush to enrol our children in these schools.

Gillard is spot on when she denies the information would be used to stigmatise schools.  AS IF!

Even the President of the Australian Education Union Angelo Gavrielatos has argued that the use of NAPLAN data alone does not take into account the rich contribution that schools make to their students’ lives in ways that stretch beyond simple evaluations of literacy and numeracy.

Enter Gillard with the antidote to Gavrielatos’ gripes: publication of “richer” data, i.e. an index of disadvantage.

I mean, there are some really good reasons that parents would want to be able to easily check a one-stop website to see how disadvantaged their local school really is.  For example, parents may want to:

Seriously folks.  This is getting out of hand.

Gillard says that “We have never had a robust index that gives us the ability to look at the level of advantage and disadvantage across all schools.”  So fine – make an index.

Heck, you might even be able to balance out some of the overfunding that is provided to elite private schools that way.

But don’t publish it Jules, for crying out loud!  Stigmatising schools is ALL this information will be used for.

In an address to the Newseum yesterday in Washington DC, U.S. Secretary of State Hillary Rodham Clinton explored the importance of internet freedom.  The position of the United States was spelled out very clearly:

We stand for a single internet where all of humanity has equal access to knowledge and ideas. And we recognize that the world’s information infrastructure will become what we and others make of it. Now, this challenge may be new, but our responsibility to help ensure the free exchange of ideas goes back to the birth of our republic.

Hillary Clinton, I’d like to introduce you to the dishonourable Stephen Conroy.  He likes long walks on the beach, and slowing down Australia’s internet access because he’s awful scared that we Aussies are going to get into bestiality and stuff.

I mean, we ALL acknowledge that “when it comes to curious kids with technically-adept mates and plenty of time on their hands, or desperately secretive pedophiles trading their nasties, the filter will be nothing but a minor inconvenience.”

But today I was just so pleased to see this debate return to the sphere of philosophy, rather than technicality.

Yes, I oppose the filter because it will slow the internet down.

Yes, I oppose the filter because it is a wate of time and money to implement a scheme that anyone can bypass if they are so inclined.

But, above all of this, I agree with Hillary, and applaud the United States for taking such a hard line on the restriction of the free exchange of ideas.

Colin Jacobs today put it nicely when he explored the Australian Government’s self-serving media release which took Clinton’s comment that “all societies recognise that freedom of expression has its limits” and spun it so fast that it made me dizzy.  Jacobs republished Clinton’s comment in context, and it is worth reposting them here:

Now, all societies recognize that free expression has its limits. We do not tolerate those who incite others to violence, such as the agents of al-Qaida who are, at this moment, using the internet to promote the mass murder of innocent people across the world. And hate speech that targets individuals on the basis of their race, religion, ethnicity, gender, or sexual orientation is reprehensible. It is an unfortunate fact that these issues are both growing challenges that the international community must confront together. And we must also grapple with the issue of anonymous speech. Those who use the internet to recruit terrorists or distribute stolen intellectual property cannot divorce their online actions from their real world identities. But these challenges must not become an excuse for governments to systematically violate the rights and privacy of those who use the internet for peaceful political purposes.

OK, so she’s probably talking a little bit more about China than she is about Australia here, but as a teacher in a NSW public school, I have seen how horribly wrong a well-intended filtering system can turn out.

FACT: People in charge of filters get it wrong.  Anyone who’s ever had to deal with government agencies like Centrelink know that the system can’t be trusted to make no mistakes.  Carbon-based errors abound.

FACT: Filters are not sensitive enough to ambiguous content. The classic example in schools is the filtering of sites relating to the book Moby Dick.

FACT: SLOPES ARE SLIPPERY! And I don’t trust our government to decide what’s best for me considering decisions that have been made relating to euthanasia, gay marriage and abortion laws.

Senator Conroy’s report was released last December, just in time to spoil our Christmas break.  I’m so glad that an antidote has come today in the shape of Hillary Clinton to bolster our cause in time for Australia Day!

Bush Slam, a great resource for teaching Australian poetry is available now for free download (for a limited time) from the ABC website:

Bush Slam puts poets and poetry in motion across Australia to discover the true spirit of the country.
Our host H.G. Nelson (Greig Pickhaver) is at the wheel of the Bush Slam bus, each week taking two very different poets to explore a rural community and meet its people. Each is given just three days to capture the heart of the town in verse – and then the tricky bit, to perform their work before the locals in a live head-to-head poetry slam for a thumbs-up or a thumbs-down!
Together, their writing covers a vast spectrum of styles, from bush poetry, to country, to hip hop.

I found this great site full of creative writing resources (languageisavirus.com), which includes a range of electronic poetry kits.  You can choose from poets such as ee cummings and Jack Kerouac – I chose Sylvia Plath, and here is the poem that I made: 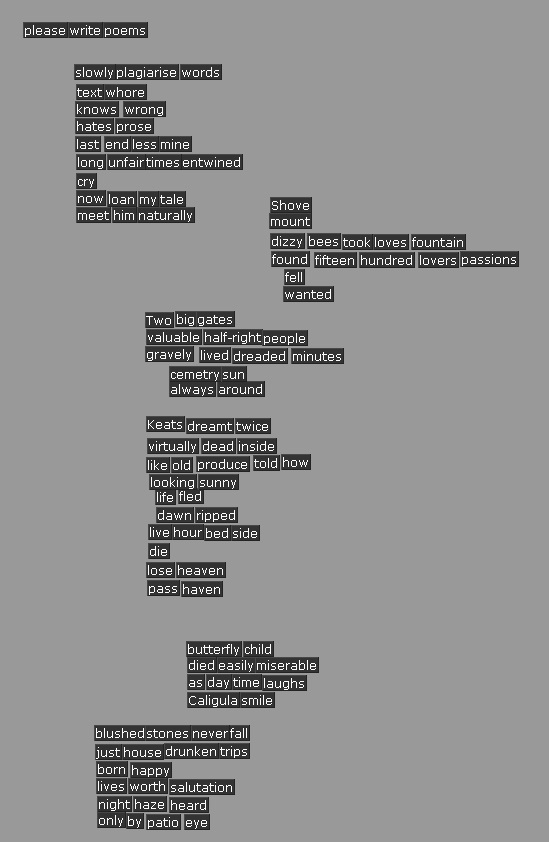 I also recommend the poetry, slam poetry and spoken word videos that are housed on the site.

Down with written exams!

I want to marry this opinion piece and have its babies.

In UK paper The Independent yesterday, Brandon Robshaw writes that It’s time to ditch written exams for students and go digital. I couldn’t agree more, if for no other reason than:

It seems obvious, but is seldom remarked, that students are being obliged to do something that they never do or need to do in real life: write with a pen for two or three hours non-stop.

To be honest, I don’t even care if exams don’t go digital…but putting an end to pen-and-paper exams must surely become a priority as the skills of extended handwriting and unaided recall of extensive amounts of facts go the way of the dinosaurs.

Robshaw argues that a computerised examination system would not only “be far kinder to students, it would also be far more useful, requiring them to employ a skill that is used outside the exam hall.”  Amen to that. The most salient point for me, however, is not the usual evangelising about digital learning.  In my experience, while many teachers can be convinced of the benefits of using digital technologies, the reality of poor funding and resources at both the school and system level make this utopia seem like a distant dream.  Or, at best, an unholy uphill battle and minefield of ‘teething problems’ that we’re just too tired to contemplate.

No, for me the point that really needs to drive this campaign is that as extended handwritten work becomes more and more antiquated, the continued use of pen-and-paper exams becomes an increasing barrier to learning, as well as a significant equity issue.  Fact:

no one writes at their best in an unfamiliar medium.

How can we, in good conscience, continue to set our students up for failure in this way?  If we know that students are not going to do their best in a written exam, why do we persist with them?  Especially when the impact is going to be felt most heavily by students with already low literacy skills.  It’s no exaggeration to say that

Change can’t come too soon. The present system is akin to forcing candidates to write on slates with chalk, or chip away at stone tablets with chisels. 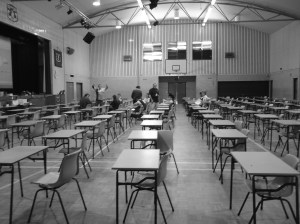 Thanks to @principalspage for the link to this article.  It made my day!

Is it just me, or does everyone else have that fresh, squeaky ‘new decade’ feeling?

I’ve been pondering what to put into my first blog post of the year.  While some are blogging about the ongoing challenge of maintaining and sustaining positive change, others are reflecting on the work and thoughts of the past year, or setting goals for 2010.

Some colleagues have used that holiday energy to create new sites – in particular I am thrilled to watch my boss walking the talk and blogging about leadership and learning, and that one of my favourite tech-teacher buddies has found time to share her thoughts on a new Ning.

As for me…I just don’t know.  Leading the digital revolution can leave one feeling somewhat bruised and battered.  We all know too well that feeling of hitting your head against the brick wall of fear and stagnation.  And with my shiny new year feeling still firmly in my pocket, I’m loathe to set a “direction” just yet.

One thing I do know is that I have to finish my PhD thesis.  And to be honest that is probably the only direction I should be setting!

Certainly another big focus of mine this year is going to be the development of the National Curriculum.  The draft Australian curriculum for English, mathematics, science and history will be available for consultation from mid February to May 2010, and with much of the consultation occurring online, it is vital that the education community makes itself heard during this time.

If you really want me to pin it down, then my early pick is: avoid burn out and nurture creativity.  OK, it might sound a bit trite.  But seriously – if we can’t start converting all of this amazing progress in the fields of technology, pedagogy and currirulum into some more rewarding and enriching experiences, then what is it all for?  We’ve cast the net wide, now it’s time to go deep.  Technology has made our lives more interesting, but this year I’d also like to see it make us happier.

I’m hoping the early adopters have generated enough momentum and goodwill in schools to allow us to spend more time nurturing creativity; our students’ and our own.  Time will tell.  The realities of poor school wireless networks, restrictive department web filters and Clayton’s league tables masquerading as legitimate government websites may drag us down yet.

Until then, the road ahead is paved with the promise of better times, thanks to the hard work and determination of leaders of change that have cleared the path for others.  Fear of ‘the new’ is now sooo last decade 😉  And that, at least, is a happy thought to start 2010 with.