Over the years I have seen many creative and high utility wall displays in other people’s classrooms. Imelda Judge for example is wizard with cardboard and hot glue – sharing a classroom with her in 2009 was a wild apprenticeship in classroom decoration!

I say ‘other people’s classrooms’ because I haven’t had a lot of success with this kind of thing!

2008: One time, I thought I had made a pretty successful poster of quotes from King Lear for my Year 12s…but they never seemed to look at it: 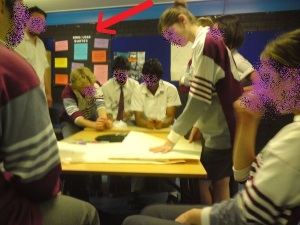 2009: Far more successful displays have tended to come out of students’ own work being put up, such as this display of lines of poetry after a lesson with Year 10:

2011: And the ‘tree of knowledge’ inspired display I’ve had in my uni teaching for the past 18 months was wrongly positioned at the back of the room, and a little haphazard to boot:

Today: When I saw Bianca’s tweet today with a picture of her classroom wall painted with blackboard paint, I thought ‘how cool is that!?’

…which motivated me to start designing some posters to add to my classroom this semester.

I’m going for a digital look, rather than getting all crafty with the glitter and paint. I plan to print them out in colour A3 and get the students to decide where they think they should be put up in the room. Here is the first one – two of the key concepts I focus on in my English Curriculum Studies unit:

by me, Kelli McGraw (CC-BY-SA) free-to-use

Mind you, the room I teach in has been a blu-tak free zone for the past two years, because it got a new paint job. This has been severely limiting. While it’s lovely on one hand to teach in a clean and modern space, it’s hard to use a room when you can’t put things up where you want. Teachers who don’t have a ‘home room’ will know the feeling!

The display I have been using so far, however, has been taking up one of the big green write-on groupwork boards in the room (to avoid having to blu-tak the wall). I don’t think I can keep using that board – I need it in my class, and other teachers must too.

So walls, you’ve had two years…the blu-tak is now a-comin 😉

If anyone else has electronic copies of pedagogy-inspired posters that they would be happy to share, I would love to see some more designs. And if you have any ideas for what else you think I should be flagging for 2nd year preservice English teachers, tell me all about that too!

‘The Blender’ is the nickname for the Faculty of Education’s blended learning room at QUT, B.240

Our blended learning space is designed with six movable group hubs, each with an egg shaped table (really great design imo), movable chairs and a digital electronic workstation.  There is also a store room containing a trolley of 20 laptops.  Yesterday I went in to take some snaps: 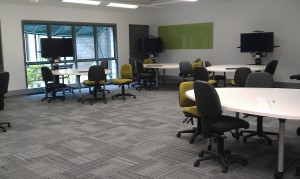 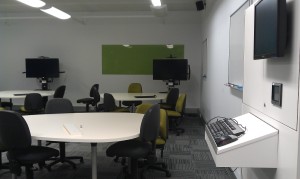 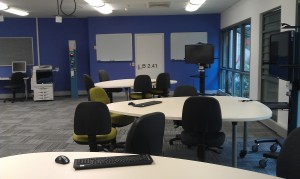 The question is: Will it Blend?

One of the features of blended learning is that it uses a mixture of synchronous and asynchronous instruction.  To this end I have already created a unit blog and twitter account that will be used by activity groups in all lessons.  Now comes the hard bit – how to change my pedagogy so that more than one thing can be going on in this room at once.  This will involve considering:

My ideas so far include:

I love this room so much, and can see so much potential in it.  I’d love to hear any ideas that other teachers have for using this space effectively…there’s a movie of the book already, lol: