It has been really nice over the past couple of weeks to get messages of congratualtions from friends and colleagues via Twitter, Facebook and email about the Award for Teaching Excellence that I recieved on the 29th of October.

My Highly Commended Award was in the Beginning Teacher category, and the other beginning teachers I met were truly inspirational, and humble.  Three out of the six of us were doing PhDs, can you believe it!  Now, don’t feel pressure anyone – it was a really skewed sample – but it sure was nice not to feel like an overqualified freak, just for a couple of days 😉 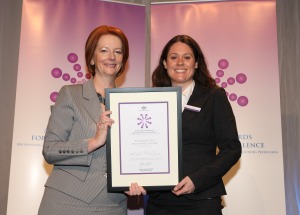 Julia Gillard presented the Awards, and she came across as genuine and warm.  Her speech was quite uplifting, with lots of great comments about the quality of our teachers and schools, and a long list of what the Government was doing to make things even better.  Just a quick, camoflaged comment about improving schools by increasing “transperancy” raised my hackles, and the sudden bristling of many of those around me was palpable.

I did seriously consider taking a second on stage to mention to her what a bad idea we all thought school league tables were (even though this fact is well evidenced, and old news to boot, it reamins one of her goverment’s pet missions.  They even made NSW back down), but at the end of the day everyone was just being so nice and celebratory, it really didn’t seem right.  Guess that is me getting more wise and mature, huh.  Mum calls it ‘having a sense of occasion’…

South Western Sydney had quite a big proportion of Award winners – from Macquarie Fields, Casula, Campbelltown and Macarthur.  This was not altogether surprising, as I have seen first hand the remarkable energy, motivation and commitment that comes from most teachers in this area.  I am so proud to be from and work in this region!  Only question is, as the region keeps getting better and better, will we lose our ‘underdog’ status?  And if so, will we lose some of our drive?

Some other people I met during the Professional Exchange sessions that were doing really interesting stuff included teachers and Principal’s from schools that were running a safe a supportive alternative curriculum for pregnant students and teenage mothers, and that had developed an authentic, problem-based and cross-curricular approach to teaching mathematics.

It was also delightful to run into someone from Youth Off The Streets, who had received an award for the program’s school-community work with Key College, and also worked in my local area.

Teachers and schools sure do work hard.  So great to see ‘what it is all for’ on such resplendant display.  Congratualations everyone!