There is a new game in town, and it’s called Ingress.

It’s an Augmented Reality Game (ARG) and it’s only available for Android – you get it from the Google Play store. But before you can play, you have to request an invite.

Once you have an invite, it is very important that you join the RESISTANCE team. Because that is the team I am on. And it is the best team. (You might think that I would go with the Enlightened, but oh no…I’ve seen the Terminator series. I know about Skynet.)

Click here for more information about factions in the game.

If you want to get an invite faster, you can join the Google+ community for Ingress and submit an artwork or other offering. Because the game is made by Google, this strategy actually does get your invite to come faster! Here is one of the art offerings I made to get my invite – a digital collage made using Polyvore: 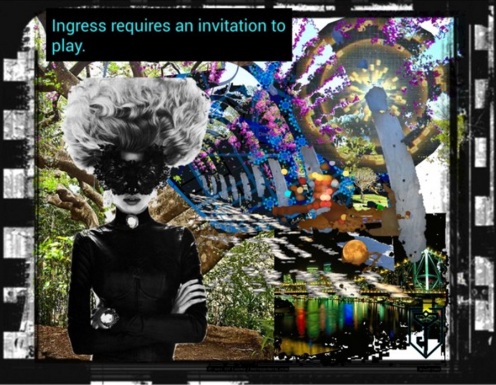 After playing this game for a few months I am now up to level 6 and fairly active in protecting the portals in my university precinct.  It’s been a great game for learning about where historic landmarks and public art is in Brisbane, as well as for getting a lot of exercise walking around the city to find portals!

If anyone in Brisbane starts playing, let me know!

BUT ONLY IF YOU JOIN THE RESISTANCE!

This entry was posted on June 10, 2013, 10:15 pm and is filed under personal, random, social media, technology, video games. You can follow any responses to this entry through RSS 2.0. You can leave a response, or trackback from your own site.